My first experience maintaining a project on Github

A month ago, I started playing AngularJS and tried setting up a working dev/testing build environment. To do E2E testing with Angular app, they recommend newly test framework called protractor. I jumped to it and it happened that there was no usable Grunt task to run protractor in the build process yet. So I spent a night creating a small grunt task for myself and published it to npm registry.

A couple days later, I got the first issue in Github which is "can't run". Haha. After I had eagerly investigated, I didn't know what is the problem and the issue still hasn't been resolved until now. :-/

A few days later, I got the first pull request to add new option to the task. I was quite surprised and excited. I eagerly worked with him and merged it quickly because I know how it feel when you want your pull request to be merged as soon as possible especially a npm module.

I was more surprised that I got an issue or pull request almost every day after that. I felt really great and tried to clear these issues and merge these pull requests as fast as possible. 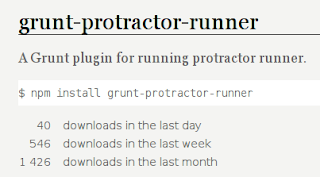 The last surprise is that it has been downloaded for 1426 times in the last month! :D
Posted by teerapapc at 11:09 PM

Programming and hacking stuff. I intend to practice my English writing via this blog too.